No, the CRPG is not abandoned. I’ve just shelved it for now because I want to work on something smaller scale I can finish. Also something I can actually play and have some fun with; CRPG’s are all static content so there’s no surprises for ME there.

Since Tunnels of Doom, there’s been a lack of procedurally generated content games for the TI. And for that matter, a total lack of Roguelikes for the platform. So my new gaming project is a Roguelike for the TI-99/4a! (Yes, it does have a name. And no, I’m keeping it under wraps, because good names tend to get stolen a lot. See the Indy gaming industry for many examples.)

A main concern I had with starting a project like this was cross-game pollution of ideas from my CRPG. But I think I can use this project as a way to do some things I won’t be doing with the CRPG. 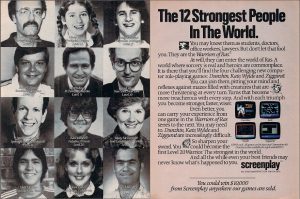 A particularly inspiring series of games (besides the obvious Rogue) for me  include Telengard, Elite, and Warrior of Ras. You can see an advertisement for the last one on the right here. (I always wondered how many of the people shown were real and which ones were actors…)

I don’t necessarily want to copy the gameplay of any of these games… WoR in particular has a funky key-based control system and is horridly random to the point that it’s more luck than skill to reach level 20. But I like the idea of a series of games each introducing new features and content as well as a different style of play, but allow you to continue with the same character. Persistence is a virtue.

Right now, I’m still in developmental stages… mainly I’m working on what kind of dungeon generation algorithm to use for the first game, and whether or not I want to procedurally generate it using static random strings or create an entire set of levels and save it as one big game file. Look for a future post describing some algorithms in detail!

This entry was posted in Gaming, Roguelike, TI-99/4a. Bookmark the permalink.

Leave a Reply to Realms of Quest Cancel reply