First of all, congratulations to Sinphaltimus for being the first player to win Wizard’s Doom! Along the way to a 93 rating, he also discovered several bugs I had to fix with the final encounter… Well done!

As I’m working on the CRPG, I want to make sure that the game has enough depth in play that it remains interesting all the way to the end. Some things I’m adding and changing in design:

I’ve actually completed all the regular sized monster graphics for the first quarter of the game, which was a lot of fun to do. My “monster editor” proved to be an easy and fast tool to do the work with!

The “boss monsters” are taking more time, mainly because I’m trying to get them to look just right. 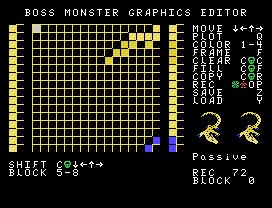 I’ve also been re-working monster statistics to match my new approaches. For certain damage types, reduction applies, for others it doesn’t. That means monsters may end up with a lot more health than the players typically have, since they may have no damage reduction at all against a particular common attack.

I still need to get the transactions done for content, and I may need to create some more tools to convert text listings into binary code so I can easily update item lists, monster statistics and so forth. After that’s all done I hope I can start working on the common and travel modules and getting the game engine back on it’s feet!