Continuing to work towards the big demo at Fest West ’18… I’ve gotten far enough with my testing of the travel and manager systems I think I can safely stop testing there and see if I can get the combat module going.

That’s not to say there isn’t bugs to fix; I’m pretty sure many dungeon features aren’t working yet, and there’s plenty of bugs with content to look into as well. But with two weeks to go I’d like to take a crack at it. Worst case scenario I just leave combat disabled for the demo.

I’ve spent a lot of time tuning and polishing up the statistics screen, so let’s have a look with a comparison, shall we?

Tunnels of Doom has a couple screens for your individual characters. They do a decent job of conveying information, and also show the portrait of the character in both a passive and attack stance.

The second screen shows a list of items you’re carrying. If the item is unknown you aren’t told what it is, just that it’s, for example, an “Untried Potion”. 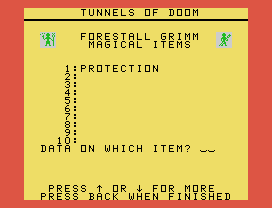 Finally, you have the party screen, which shows you how much money and rations the party has, quest items they have and how much time they have left to find them. They also provide the health and wound status of the party, using the graphic characters as a quick reference.

Some negatives about them? Well, it’s all very plain, although this is more a factor of Tunnels of Doom itself, which was written in 1982. They also are not utilizing the entire screen, only 28 columns, because at the time they were fairly certain 90% of their customers would be using an RF modulator on a TV, which tended to cut off the first and last two columns. And finally, something not conveyed by the screenshots, the screens are VERY slow to load, you can visibly see text being projected on the screen. This is because Tunnels of Doom was written in GPL, a low-level byte-encoded language that had to be interpreted. 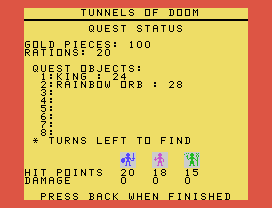 Despite the issues, I always loved the stat screens. Aside from the fact it contained needed information, it really gave the game a greater feeling of depth. When my brother and I first played we would naturally name characters after ourselves and friends and then take turns each moving our character in combat. Does that even happen with party-based CRPG’s anymore? Probably not, since the modern equivalent would be siblings playing an online game at the same time. 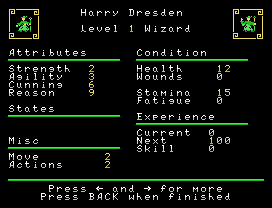 So, I was definitely inspired by Tunnels of Doom when I made my stat screens. Of course, I have a few more since the game has greater depth…

All the screens load very fast. I initially considered using a two-screen buffer system and doing a screen swap to guarantee clean breaks, but in practice I’ve found it draws fast enough on the same screen that you don’t notice any blips.

Every screen has the character name, level, and class at the top. Having each character have their own separate “avatar” is always good to establish a sense of identity.

On the first screen, you can see attributes, health & wounds, stamina & fatigue, move & actions, experience threshold and current values as well as skill points. Your Health and Stamina are determined by attributes, which are fairly fixed through most of the game. Level also contributes to them. Skill points are used to train up skills, you gain one every time you level plus in special circumstances. 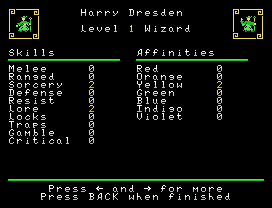 The second screen shows all your current skill levels. Skills are determined by class at the beginning and then you can choose which skill to advance in, if you can find a trainer that will teach it… The “Affinities” is concerned with magical schools; different classes are stronger in certain forms of magic than others, at least at the beginning.

The third screen is your equipped items. Each item type in the game has an icon, so you can discern what type it is more easily than just by the name. 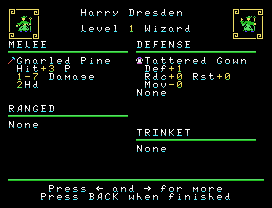 There’s a lot of shorthand about the items themselves, the manual will need to give explanations. The staff here, for example, has +3 to hit (on top of the skill your character has in melee) and does… Piercing damage? Hmm, bit of a bug there. 😀

Anyway, it does 1-7 points, not including a strength bonus, and is 2-handed, which means you can’t wield an off-hand item such as a shield while using it. 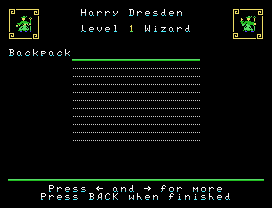 The tattered gown is cloth armor, and offers no significant reduction against any damage type. It does offer a +1 to defense, though, which means it allows you to evade attack but doesn’t reduce normal damage or grant any resistance to magical damage. It doesn’t slow you down though, no change to movement.

The fourth screen shows your backpack and all the items you have within it. Needless to say, and empty backpack is a sad one indeed… A major factor of game play that I have yet to test is if ten item slots per player will be enough. Other than ammunition, all items occupy a single slot, so I need to see if that doesn’t create issues. 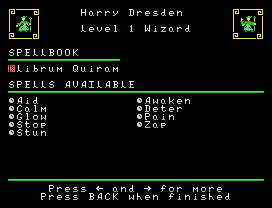 The final player screen, which only shows up for characters with spellcasting ability, is the spell screen. This shows the spellbook currently equipped, and the spells contained within it. The beginning spellbook only has colorless or “gray” spells, the weakest as no affinity bonuses apply. It has a nice mix of utility and combat spells though. A bonus prize to anyone who can identify the source of the spellbook name…

So that’s the player screens. The party screen is very similar to Tunnels of Doom, as you can see… 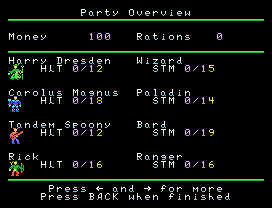 At the top, we have the party’s money and rations. I have actively avoided using the word “gold” because I have always found the concept of thousands of gold coins to be a little ridiculous. In game, various NPC’s will refer to coinage by different names, but it all just becomes “money” in the end, which is a bit more abstract. Testing the economy will be interesting… I currently am only using a single word for wealth, so 65535 is the maximum amount of coins you can have. I’d like to keep it there, but it all depends on how much you got coming in and going out. 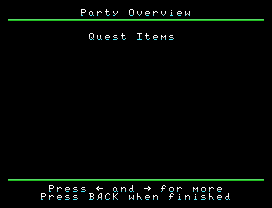 Each character name and portrait is shown, along with their class, wounds & health, fatigue & stamina, and current active states. I followed the pattern of Tunnels of Doom by having wounds and fatigue being an amount that counts against health and stamina. I’m not certain though that the display works for this… It looks like you have 0 out of 12 health. I may need to change the labels to DMG and FTG instead?

The second screen, which is woefully empty, contains a list of quest items. There is a potential of 64 different quest items in the game, so I had to design it to allow for multiple screens if needed.

At one time in my design, I considered having a quest system. That would have been shown on the party screen as a list of tasks to accomplish. This idea ended up getting factored out though; the various NPC’s are able to give rewards of all types (money, items, experience, skill points) and given it’s a vintage game, it’s only fair to ask the player to, you know, take some notes. 😉

Okay, back to work! I got some bugs to fix still…