Quick share of some screenshots of where I’m at…

So initially I got a nice video garbage screen when going to combat. Lots of bugs with functions not returning to the caller, workspace overlaps, and video buffer overruns. After getting a lot of that sorted out, I finally have the display showing up and it reaching a point of “user input”: 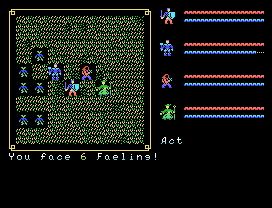 The initial encounter screen. This is mostly good. There is the lack of a plural on the monster name. (Yes, it was supposed to add an ‘s’ on the end.) And the position of the units isn’t correct; my party came from the left so they should be on the left and the monsters on the right.

Hmm, it’s missing the “Your turn guy, this weapon ready” line. And the commands look a little squished. And his actual CHARACTER is gone from the map and the sprite “blink” effect looks corrupted. But at least it’s at a stage where the character can do something.

One step (and debug) at a time…

2 Responses to Work in Progress