All I Want for Christmas

Wow… It’s amazing to be here. On the cusp of release! My plan is to do so next month, in time for the holidays. 😀

I’m currently working on the “release candidate” code, which is me playing a game all the way through myself, and fixing stuff on the way. I’ve found enough substantial changes to make it worth the time and trouble!

A change I recently made was to “pad out” transaction scripts and mob files to a near 2-bit value. This gives me a little buffer space at the end of each transaction for changes later after release that won’t alter the address location in the disk file. Without that, any minor change would require a player to start the game over from scratch, something I’d like to avoid.

The game will be sold through a fellow 99’er and a good friend’s website at ArcadeShopper. He sells a lot of great retro equipment and software for a variety of platforms, and hey, anything I can do to pay back a bit to the community is great! 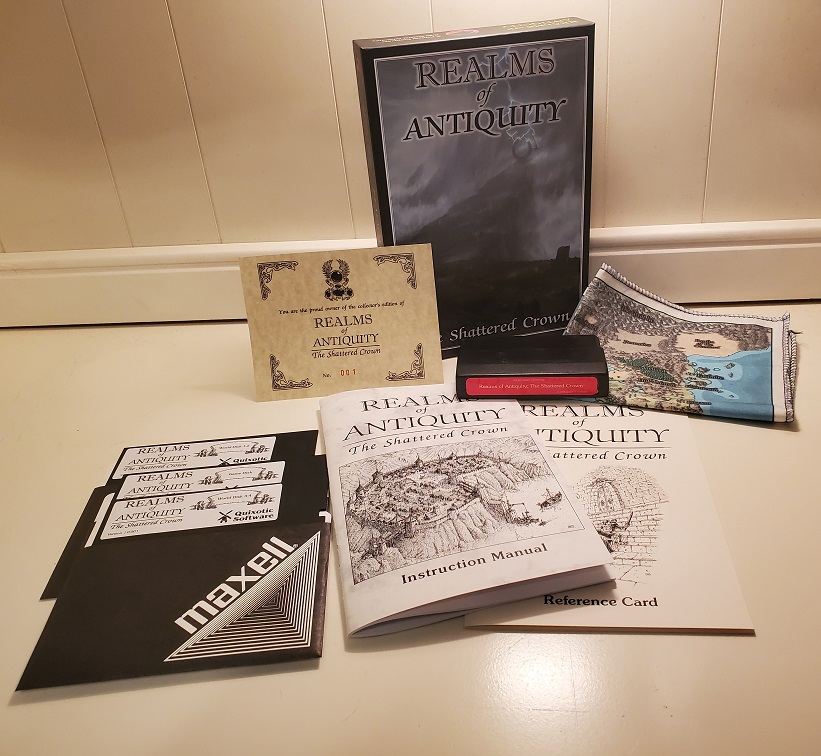 As part of release, I’ve also been working on the tangibles. The game will have a full digital release, of course, but you can’t have a classic CRPG without a collector’s edition!

I’ve had a game box custom-created by BoardGamesMaker, which is large enough to fit all the Collector’s Edition contents. They do excellent work, albeit with a bit of lag time. The unit cost is VERY high though, and so I probably will have to have boxes printed in small numbers, even though I’d save money with bulk.

The manuals I originally had printed by Lulu, but I decided I wanted to get a slightly better one printed locally at a print shop I’ve done business with before. They did an excellent job with both the manuals and reference cards! Sadly, I decided this after I’d ordered a batch of 50 from Lulu, so I guess I’ll have spares to sell…

The cloth map wasn’t something I’d sure I’d even be able to do, until a good friend and fellow retro CRPG developer suggested Spoonflower. I was able to print 9 maps on a yard of fabric for a relatively low cost. I then engaged a professional seamstress with years of experience (Thanks mom!) to help me baste and hem the edges.

It would come as no surprise to any retro-enthusiast that there are many who want the game on ACTUAL old-school media, namely cartridge and floppy disk. Of course, this presents some challenges…

The cartridge is the game’s executable loaded onto a cartridge for faster loading. This also removes the need for any of the other requisite cartridges to run the game. A fellow 99’er has offered me a good bulk rate deal on assembled boards with EPROMS, and I have several dozen old TI carts I can recycle the case for. However, the game loads just fine from disk as well, and the cartridge ROM can be put on an SD card for a modern-cartridge peripheral called FinalGROM. So at some point I’ll probably say “No more carts.” I had cartridge labels printed up in two styles at StickerGiant.

Floppy disks are interesting… They are no longer manufactured, and aren’t something you can 3D print. So working disks can be a bit of a pain to find. Plus my game is pretty big, it requires three double-sided double-density (360k) disks to store. And you can’t use high-density either, they won’t work with the older disk drives or controllers.

Fortunately I got an offer of some old user group disks from an enthusiastic supporter, and I bought some from Greg as well. And anyone who just wants labels because they have their own disks they can use I’ll provide them. (3 1/2″ disks I can’t do anyway… that particular combination for the TI is very rare.)

How many collector’s editions will there be? Unknown… I had dreamed of only selling 99 at most, but I thought that was unlikely to happen. Now, though, seeing the enthusiasm of the retro community I don’t know, it could get that high. Either way, there will be a point where I’ll say “I’m done, digital only going forward.”

Stay tuned for a link to the website in the next couple weeks!

This entry was posted in CRPG, Design, Personal, Screenshots, TI-99/4a. Bookmark the permalink.

6 Responses to All I Want for Christmas