I’m going to be at Emerald City Comic Con for the next four days, enjoying myself! Always a nice way to recharge the batteries.

My revisions for levels/experience and bit-delimited text are largely done. I then decided to make some tools updates. Combat work is proceeding slowly because I need to make sure I have sufficient graphics space for all the map types I want to make… I have to take into account content that is not actually completed yet.

Originally I had text encoding separate from mob and transaction encoding, which meant I had to hand-update everything if a change was made. I realized that this was unsustainable, so instead I modified my script encoding to allow me to insert text directly into the scripting code: 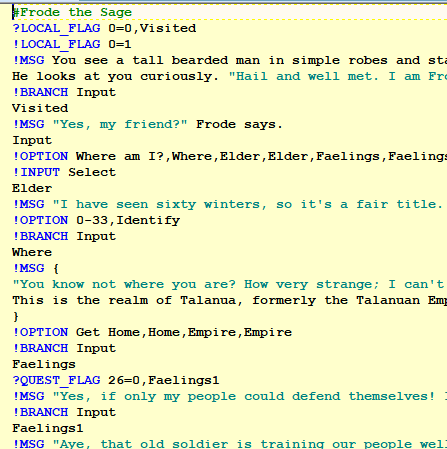 Mobs are the same, as some are merely single-line text providers. The biggest issue was I had to change my common delimiter from commas (which text can have) to pipes (which I don’t use.)

I also intend to give “names” to transaction blocks so that I can reference them in my mob file by name. That way if a given transaction increases or decreases size, the reference remains the same.

This entry was posted in Blog, CRPG, Design, Personal, TI-99/4a. Bookmark the permalink.