Review: When a Star Falls

Time to take a short side trip in my blog to 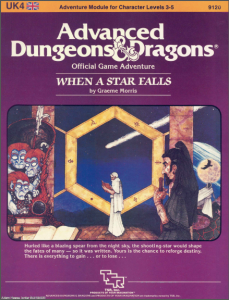 “When a Star Falls”, UK4, was the first Dungeons & Dragons module I ever purchased. It was back around 1984, when book stores were selling D&D products and occasionally dice.

I bought it because it was for levels 3-5, a low-level module. I was still playing the box set of D&D at the time, and I didn’t realize the module was for Advanced Dungeons & Dragons. Given that at age 9 I could barely follow the regular D&D rules, Advanced was quite out of my means.

As I got older, though, I began to realize what a treasure I had accidentally purchased. The UK series of D&D modules were some of the best ever written. Most of them featured intricate plots and clever adventures that were far more than just a dungeon map with a list of encounters. It’s unfortunate that TSR UK was eventually closed down in the mid-80’s. The lead writer, Graeme Morris, actually left the gaming hobby entirely and his whereabouts are unknown.

So, on to the module…

The first bit of awesomeness about this module is how it begins. While traveling across a moor, the party comes across several dead monks, encased in a strange web. The web is a living entity that absorbs memories. After killing it, the memory web releases all its stored memories, which imprint themselves into the characters. There are over a dozen memories, described both with a few lines of dialogue AND an illustration.

h yeah, the illustrations are incredible as well. The artist, Jeremy Goodwin, creates some incredible scenery and sinister characters with an asymmetrical style that really stands out from the U.S. D&D modules. Even his black and white illustrations rock. If I could find him and he was still a commercial artist, I would SERIOUSLY consider hiring him to do illustrations for my CRPG’s manuals.

Anyway, the memories give the players the information they need. A star fell from the skies (a meteor) in the region, and the monks were on a journey to take a valuable tome to a sage, who would be able to tell them where it fell. The monks were going to retrieve the star for their master, the sage and oracle Shalfey, who resides at the Tower of the Heavens. 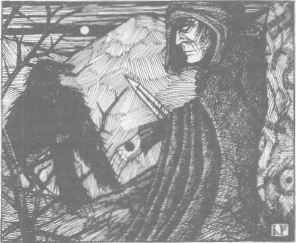 During their travels, the players also have an unwelcome visitor, the monk Sion, who serves Shalfey’s principal apprentice, Piyarz. (I also LOVE the names…) Sion has undergone a terrible ritual to become a shade, a half-shadow man that gains strength in shadows and is effectively immortal. He stalks the party, attempting to learn their intentions and, if need be, slay them.

The sage Derwyth tells the party that the star has fallen to the north along the river. You eventually discover that it has fallen directly on the lair of a tribe of derro, small blue-skinned creatures of the Underdark known for their sadistic cruelty and insanity. (The Underdark was still two years away from being introduced into D&D at this point.) Most of the derro were killed in the blast, but the survivors excavated the fallen meteor to examine it. The party must enter what remains of their lair and retrieve it. 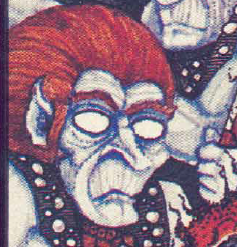 After this, the party travels to the Tower of the Heavens. If they head north up-river, they have an interesting non-combat encounter. Tribal hunters and fishermen live on a lake there, but they’re isolationist and paranoid. Numerous derro raids have left them suspicious and hostile towards strangers. The party has to be diplomatic and careful to convince them to allow them to cross the lake. At one point in the village, while being hustled through by spearmen, a child screams from inside one of the huts, causing the party’s escort to panic and attack them. If the party manages to keep their temper, the mistake is discovered and all is well. These kind of quandaries for players to solve (preferably with no violence) are a welcome change from dungeon crawls filled with no ethical decisions to make.

At the Tower of the Heavens, the players discover the truth. Shalfey is being held prisoner by Piyarz and the other lesser sages. None of the other tower residents, including the gnomish mercenaries who guard it, know this. Piyarz desires to kill Shalfey and take over the tower, but Shalfey locked himself into the upper tower and threatened to destroy the books of prophecy, which are needed to see the future.

Again, the players face an ethical dilemma. While the lesser sages, Piyarz, and their monk guards are all fair game, the gnomish guard and the regular tower residents are all innocent and unaware. A party who charges in, slaughtering everything, will neither get very far (they’re SORELY out-numbered) or accomplish anything heroic. Pretending to be supplicants for an oracle reading and then sneaking in is the best route.

When the players deal with Piyarz and his minions, they learn the truth from Shalfey. The books of prophecy (which he just burned prior to the players coming in) were blank! Their knowledge of the future ran out, and the last clue given was that a fallen star must be taken to the nearby hills where a group of “dark smiths with a fabled library” live and exchange the meteor for a new set of books. So one final mission remains.

The dark smiths are a group of Svirfnebli, underground gnomes, who found a prismatic sphere guarding a set of books and decided to build their forge and base around it. While not evil, the inference is that the smiths are anything BUT good. They have built a number of automated minions called Maschin-I-Bozorgs that look like giant  frisbees that fire darts and jets of steam. The party has to fight some before the Kagu-Svirfnebli will talk to them, and take the fallen star in exchange for the new books of prophecy. The star dispels the prismatic sphere guarding the books.

One last trick remains, though. The Svirfnebli leave the forge to return to their home in the Underdark, setting off the “self-destruct” button on the way out. The party must flee the cave before it collapses. When they reach outside, they find two red dragons waiting for them, allies of the Svirfnebli who are suspicious at the destruction of their home and angry at losing a source of treasure and food. This is the one part of the adventure I don’t like; aside from the meanness of dropping two major opponents on the party at a vulnerable time, and feeling like a cliche ending (you have to drop dragons into it, seriously?), the worst is that dragons are SOLITARY creatures and would never pair up for any long period of time.

The ending of the adventure leaves the party with questions. What was the fallen star, exactly? What are the intentions of the Kagu-Svirfnebli? Will they make a weapon of evil destruction from it? The great thing about this adventure is how it leaves an open thread for future endeavors.

The adventure recently became available on D&D Classics as a PDF. You can download it here: http://www.dndclassics.com/product/17075/UK4-When-a-Star-Falls-%281e%29?it=1

This entry was posted in Gaming, Review, RPG. Bookmark the permalink.

1 Response to Review: When a Star Falls