The work continues… I absolutely intend for this game to be finished and complete in 2018. It’s amazing how many different pieces and parts need to be completed though to make that happen.

Right now, I’m working on something I’ve been doing off and on since the start of the project, the opening title screen (with music) and the interface for creating new games. The code has never been written so it’s a new fresh thing to do, and it’s helping me sort out which functions need to be in the “root” module.

The title screen however, I’ve had a prototype of that for awhile. First some background…

The TI-99/4a’s video chip is the TMS9918A, released in 1979. The “4A” part of the computer’s name comes from the fact it has the appended version of the original chip, which added “bitmap mode” to the TI. After studying it and working with it for some time, I have to say it was probably one of the best chips on the market until the Commodore VIC-II came out. And even then, it was still competitive; if the TI had possessed the same level of 3rd party software development as the Commodore you’d have seen some pretty impressive games on it. 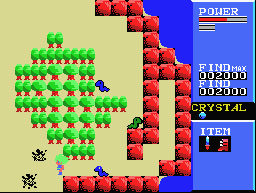 This same chip was also used in the MSX computer systems that were in widespread use outside the US in the early and mid 1980’s. MSX games actually look a lot like classic Nintendo games; I suspect that many of the same developers went on to write NES games and used similar software techniques to maximize the hardware.

The MSX2 platform had a successor chip, developed by Yamaha based on TI’s original schematics, called the 9938 (and later 9958), which offered 80-column resolution and much greater sprite and color support. Adding a 9938 or 58 to the TI was a good way to get an 80-column mode.

So bitmap mode on the 9918A was meant to give the TI the ability to do “turtle graphics” like most of the other platforms of the day, which could freely draw all over the screen. And so it does… but with some critical differences in implementation.

Most other computers approached high-resolution video as follows: 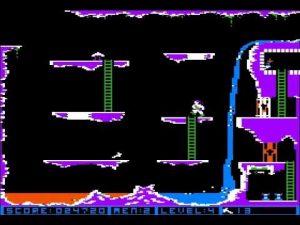 Most 8-bit computers didn’t have enough CPU cycles to render the screen with a lot of colors, so some would double the pixel width to gain more colors, creating an odd hybrid look. This was typically referred to as “artifact” colors, this effect can be seen on the Atari 8-bit home computers, Tandy Color Computer and Apple II. (Wozniak, being a brilliant engineer, also figured out a way to get six artifact colors not just four, among other optimizations.)

TI took a different approach. They extended the existing “graphics mode” which used an extended 256-character ASCII table by adding two more tables so you could fill up the entire screen with 768 patterns. Then they expanded the color table to match it in size, so you could define a foreground and background color for every row of 8 pixels. Some mathematics are required to calculate pixel location, since it wasn’t a continuous buffer, but this allowed you to have complete control of the screen to the pixel.

This approach has some advantages. Unlike every other computer, the TI can have ALL colors on the screen at all times. And with a cell-based architecture, things like scrolling are a lot easier to do, albeit at the cell level, not the pixel level.

Blue and red only intersect well in some cases…

Of course, there are trade-offs. Only having two colors for every eight pixels requires some artistic planning to prevent “jagged” effects. This is somewhat mitigated by the fact the TI doesn’t render color differential all that well in NTSC. An example: If you place two single pixels of two different colors next to each other, unless they are VERY different in brightness and tint, you won’t be able to discern them. Two pixels of the same color next to each other, though, stand out much better.

A far worse problem is that the 9918A has it’s own memory separate from the CPU. Changes to it are done through a memory mapped port, which means the CPU has to spend cycles moving data back and forth. On paper, using 16-bit memory for registers and ONLY registers for the move, you could theoretically pass data fast enough to update the 6K pattern table at a 30/second frame rate, but in practice it doesn’t work. Games such as the Red Baron Flight simulator get around this by only doing partial updates.

Also, the VDP chip only had 16K of RAM, and you’re using nearly 80% of it just to render the screen. Add in a sprite pattern table (another 2K) and you’re pretty much out of memory with no room for buffer space. This can be problematic if you want to use disk file systems; they require at least a kilobyte at the top of RAM to operate.

Finally, by separating color from pattern, it makes color and pattern changes difficult to do at the same time. Other computers had to create sprites in software by storing pixel patterns and finding ways to “blit”, or “bit block transfer” graphics over top each other to create a seamless sense of movement. The TI can do this, but not very well as you have to move stuff at least 8 pixels at a time horizontally to prevent color corruption, and two writes to two different areas of memory may lead to a “jumpy” look with color lagging behind the pattern change.

For the CRPG, I’m using bitmap mode, but a hybrid form of it. You can configure the VDP registers to mask out the extra color and pattern tables and get an “enhanced graphics mode” that gives you the color depth of bitmap mode but only in a single table. There is a small trade-off with sprites; they are dependent upon the pattern table register for some calculations and the bitmask throws them off so you only can really use 8 instead of 32, but it’s an acceptable limit. 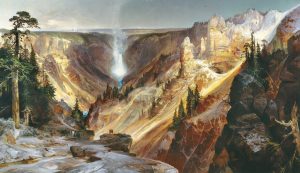 For the title screen though, I’m using full bitmap to make a beautiful scene, based on a painting by Thomas Moran. The only problem I had was, how to draw it?

Most of the graphics programs on the TI have the same fundamental problem, they’re trying to apply a pattern that doesn’t fit the TI’s architecture. Drawing lines and circles is not the way to make a good looking title screen. Most of them fail to expose the true nature of bitmap mode as well, neither telling you about the color limitation or giving direct control of foreground and background color. (Paint N’Print is probably the most usable in this regard, but it alternates foreground/background with no indication of which you’ve changed.)

There’s a couple of modern tools you could use for this work.

Magellan is designed to let you edit character sets and draw maps, but it doesn’t have bitmap-friendly tools. (extend to three tables, plot all characters automatically to make a drawing grid, etc.)

Convert9918 is a well-designed tool to convert any existing image to 9918A format. It has a wide variety of different algorithms to color match and render images. In practice, though, I haven’t found settings to get the effect and appearance I want. In particular, details get lost and you get some weird color choices at times. 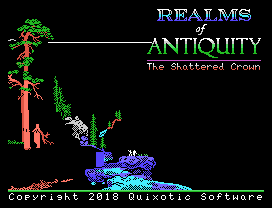 The work so far…

So how am I doing it? I wrote my own bitmap editing tool. Since I’m only really working at a pixel level, it doesn’t need to BE in bitmap mode all the time, just have a memory buffer of data I can edit on screen and then occasionally view to make sure it looks good. Using a paint program I drew a lattice of grid lines on the image I want so I can approximate things and decide which objects I want to stand out and which ones I want to mask.

So that’s what I’m doing… it’s slow-going, but very satisfying because as an artist I have control over how it looks. And I think I can make something very cool. 🙂

This entry was posted in CRPG, Design, Graphics, Screenshots, TI-99/4a. Bookmark the permalink.