I didn’t get quite as much done as I’d hoped, but I did make some significant progress on the CRPG. 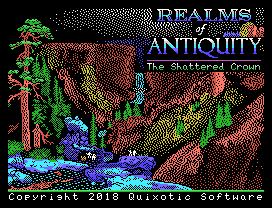 I finally finished the title screen! I may still go back and tweak it a bit later, but right now it looks good enough to ship with if needed.

I also completed the musical opening, although I still need to integrate it into the program. I’m still going to do some work there as well; there’s a bug where after the song is completed there is a last little “bing” of notes from a source unknown. I also want to soften the volume on it; it’s rather loud on the hardware even with the P.E. Box on.

Code-wise, I completed the Travel module, all that remains is the sailing portion which is tied into the manager module. I’ll no doubt have many bugs and issues to work through once I run it, but at least it’s code complete and it compiles without error.

The manager module is a bit of work, because I’m throwing out most of what I’d done previously and starting fresh. For statistics screens, I originally loaded screens from disk and then populated them with values. This time around, I’m generating the screens completely in code. (Yes, I COULD store them complete screens in memory, but see below on that.)

I’m hoping that transaction code will remain mostly the same with just some tweaks. I figure I have at least a couple multi-hour sessions ahead before I can call the Manager module code complete.

My goal is to keep the program file, which is loaded in chunks into the extended memory, at 128K. This is to keep the base disk size for the entire program at 180K, because there are still a LOT of 99’ers who lack disk controllers capable of more than that. Disk controllers are mostly TI on eBay these days, and if you don’t get an 80-track modification done to them they’re limited to 180k.

This entry was posted in Coding, CRPG, Screenshots, TI-99/4a. Bookmark the permalink.