Despite not having a post for awhile, I’ve been very busy on the game! I’ve been updating the progress page with various bugs and issues. There’s a LOT of code to test and fix; in particular I know the FX code has a lot of issues to deal with.

It’s early to start on it, but I already made some adjustments to game mechanics. I found my first set of encounters the monsters were just a little TOO hard to drop quickly, and they’re supposed to be a nuisance not a full on battle. Hit ratio seems fairly low too; my fighter has swung and missed three times in a row, he should be a bit better than that.

One thing I ended up adding to the game because I had a new module for combat encounter generation and resolution is a complete “you found a chest” system for post-combat. I’m still working through bugs, but you can see it in action here: 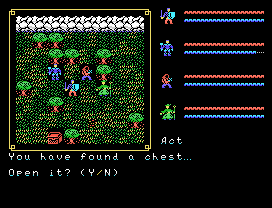 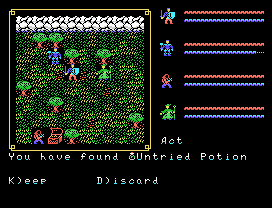 I designed it so if a given character is chosen to open the chest, all the others take a step away from it. (Like ANY good adventuring party does.) I need to make sure they don’t move over obstacles like trees though. 🙂

I still need to test the item distribution system as well. The game checks if the player who you try to give the item to has a full backpack or not, offers the option to trade to another player, or discard an item from your backpack to make room. Lots of logic to debug!