So I’m definitely in alpha stage with the game engine.

For those of you unfamiliar with software, alpha testing is typically testing of the project with internal testers, and using both white and blackbox testing. At the moment, the sole project employee is me, so I’m doing all of it. 🙂

In the near future, I will have a beta test with a select group of people. I haven’t decided yet on who; feel free to post on this thread if you are interested!

Bear in mind though that being in a beta test means actual testing work, not just playing the game. I would expect bug reports and lots of constant feedback. If you’d rather just wait for the official release to enjoy the game, there’s nothing wrong with that.

Today, I had the unique pleasure of fixing a bug and then seeing several features I hadn’t tested yet work perfectly! 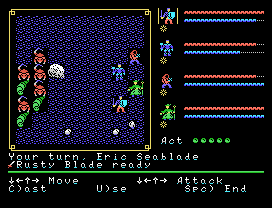 This particular combat, I can see my multiple monster generation system worked like a charm! The rats poisoned occasionally on melee attacks, and the monster AI was fairly good too.

I still have several combat bugs to fix. The fighter, for example, should not be able to cast spells… In fact, the whole spell system has to be fully tested.

I may have to write another side-tool engine to test the FX effects as well. I noticed while debugging the trap ones that there’s a LOT of “artistic adjustment” to make them look just right, and the best place to do that is in a separate tool so I can just cycle through FX and fine-tune them.